I grew up (and currently live near) Green Bay, Wisconsin, so let me start off by saying I’m certainly a little biased when it comes to this topic. But I truly believe that grouse hunting Wisconsin is one of best areas to do it. Like any state there are certainly areas where you aren’t going to have much luck, but in northern Wisconsin the state does an excellent job of managing public lands to make sure there is plenty of habitat for the grouse. This contributes to one of the better grouse populations in the country. If you do a little bit of homework beforehand you’re going to have a great time for some Wisconsin grouse hunting. Even hunters trying to grouse hunt without a dog are sure to have some good luck in these areas.

But enough rambling on, lets take a look at some of our favorite counties for getting after the birds! I’ll also suggest a few places to spend the nights between hunts. A quick note here – These are hunting camp style hotels in northern Wisconsin. If you’re looking for a 5 star resort with unlimited amenities, you should probably just stay home. The people here have been friendly and happy-as-heck to have us, and we’ll keep coming back for years to come. I’ve done my best to include hotels that allow dogs, but make sure you call ahead to verify.

Price County – The Ruffed Grouse Capital of the World

There’s no way in hell I was going to write this article and not include Price County. Anyone that tells you that this mecca for grouse isn’t one of the best grouse hunting spots in the country is simply trying to keep this hot spot for themselves. 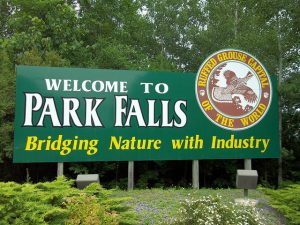 Park Falls claims to be the Ruffed Grouse Capitol of the World, and I can’t say I can argue with them!

With over 300,000 acres of huntable land available, Price county does an excellent job preserving as much grouse habitat as possible. They’re fully aware that a ton of their revenue in the fall comes from grouse hunters heading north to hunt in their forests, and they do a great job making sure we keep coming! In my college days when I was a little short on cash I would buzz up to the Phillips or Park Falls areas and simply spend the weekend hunting and camping out of the back of my truck. Most hunters would do anything to bag a daily limit of grouse and woodcock over an entire weekend. My 7 month old English Setter & I would typically have our limit by noon.

Phillips, WI – Stay at the Timber Inn Motel or the Super 8. Both places have allowed us to bring our dogs into the hotel with us, and have nice accommodations. Just call ahead to make sure you’re cleared to bring your dog so they don’t have to spend the night in the truck.

While I would certainly buzz up to Price County to hunt in my college days, most of my time was spend in Rusk County. The shorter distance from where I went to school (University of Wisconsin – Stout) combined with some incredible bird populations meant that more than one class was skipped to hunt up here with my dog – Trigger.

Some of my fondest memories from grouse hunting Wisconsin took place right here in Rusk County. The first bird I ever shot over Trigger happened here, followed by the 2nd & 3rd within 30 minutes. To say this had me excited to keep coming back would be the understatement of the century.

The combination of the Rusk County Forest Lands & the Flambeau River State Forest add up to almost 180,000 acres of huntable land open to the public. Much like Price County, Rusk County knows that their incredible grouse population keeps hunters from around the country flowing into it’s towns throughout the fall. They’ve done a great job to make sure they’re going to want to keep coming back!

Ladysmith, WI – One of the larger towns in Rusk County, there are plenty of places to stay here. I always camped out of the back of my truck when I hunted (cheers to those broke college days!), but I’ve heard good things about the Ladysmith Motel & Suites. They allow pets & the price is reasonable. 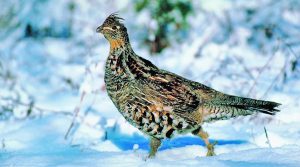 It might be cold, but if you’re an avid hunter grouse hunting Wisconsin’s well-managed forests needs to be on your bucket list!

If you look at a map it shouldn’t come as a surprise that Sawyer County made this list. It sits on the northern border of Rusk County & the western border of Price County. If you’re considering grouse hunting Wisconsin, this should certainly be a place that you take a look at. I’ve ventured up here more than a few times, and always had great success in the miles surrounding the Hayward, WI area.

I’m not going to dive too much into the specifics of Sawyer County simply because they’re incredibly similar to Price & Rusk. Just know that if you’re in Wisconsin grouse hunting, this is definitely a spot you want to pass through.

Hayward, WI – Check out the Riverside Motel. They’ve got some super reasonable rates & it’s right on the water!

Vilas County is another haven when it comes to grouse hunting Wisconsin. Situated way the heck up there on the northern border of Wisconsin, it’s certainly worth a drive. Vilas county has over 245,000 acres of public land open to hunting. Like much of northern Wisconsin they do a great job of managing it for grouse so they have plenty of good feeding areas and habitat. So load up that 20 gauge (or 12 gauge if you prefer that sort of thing) with bird shot and head north for some great grouse hunting!

Minocqua, WI – Be sure to check out the AmericInn in Minocqua. We’ve spent a few long weekends in the Minocqua area. Between the incredible hunting & plenty of places to eat its a great place to stay.

Florence County – A Cabin In The Northwoods 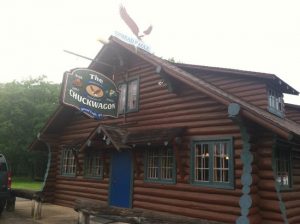 If you’re grouse hunting near Florence & are looking for a bite to eat, I highly recommend The Chuckwagon’s Friday Fish Fry!

I’ll be 100% honest here – I almost didn’t put Florence County on the list. I still might even take it off at some point. Is it because the grouse hunting isn’t any good? Absolutely not. It’s because this is where I spend most of my time grouse hunting Wisconsin, and I’m not really sure I want to tell people about my spots!

While I wouldn’t say it’s quite as good as Price or Rusk counties, it’s a great county to hunt if you’re located on the eastern side of Wisconsin & don’t way too long of a drive. We’ve had some great success around here. Since we own a cabin near the tiny little town of Florence, WI I ended up spending a lot of time in my childhood around these parts. I grew up grouse hunting in surrounding state forests & paper company properties, and we’ve got a few hidden gems locked down pretty well. Since we spend so much time in the area we certainly do more scouting than most, but we get a lot of grouse every year.

Iron Mountain, MI – It’s actually in the upper peninsula of Michigan, but the Comfort Inn in Iron Mountain is a great spot to get some sleep between hunts. It’s just a short drive from some of the best grouse hunting in Wisconsin that we’ve found.

Grouse Hunting in Wisconsin – Just Get Up Here!

That wraps it up for my list of the top counties for grouse hunting Wisconsin. Be sure to check out these hotspots, and don’t be afraid to explore other areas as well! Wisconsin holds some of the largest grouse populations in the entire country, so you’re definitely going to want to schedule some time to give it a try. If you’re new to grouse hunting, I highly recommend you go ahead and read up on some grouse hunting tips here.

Grouse Hunting With A Bow

How To Hunt Ruffed Grouse

Improve Your Shooting In The Grouse Woods

Ruffed Grouse Hunting In The Rain

Where To Find Grouse

What Do Ruffed Grouse Eat?

Grouse Hunting Without A Dog